Let us unearth the cyborgs within ourselves. — Advaya

Let Us Unearth the Cyborgs Within Ourselves.

What is a “cyborg”? What can the cyborg teach us about contradiction, corruption, kinship, and partial, fluid, and liminal identities? 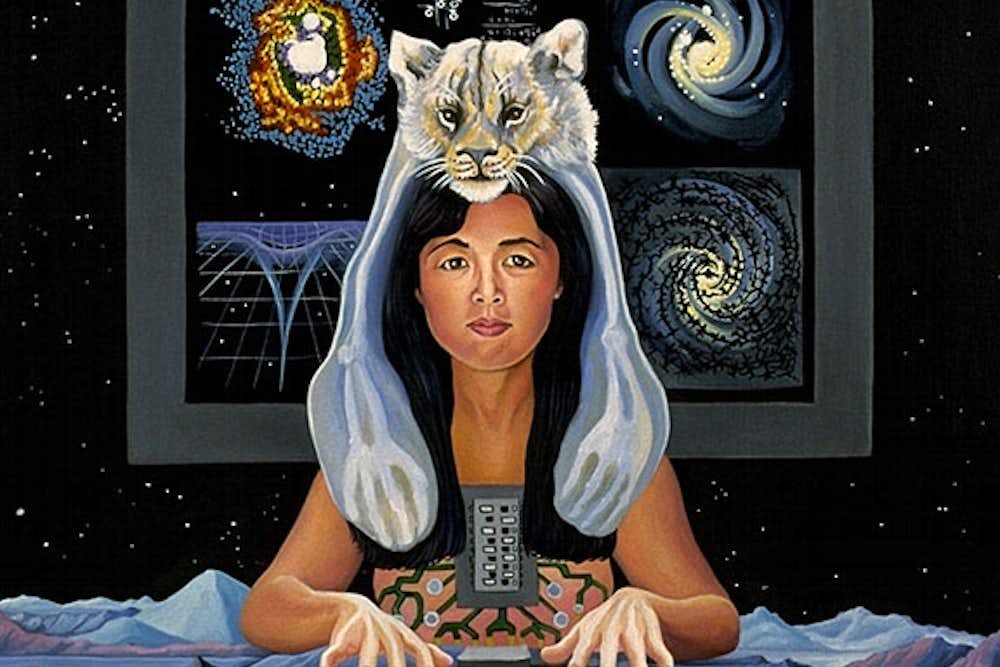 Levitating mobiles, matter-bending teleportation portals, and make-anything-you-want machines were perhaps once upon a time thought of as futuristic technologies. The future is here, somewhat, but the reality looks thousands of miles apart from these visions. Instead of the future many of us might feel (paradoxically) nostalgic for, we are looking at devices, networks, spaces and platforms that enable mass surveillance, ever-increasing commercialisation, privatisation and standardisation, fuelling globalisation and a new kind of imperialism. We are told things are better, more efficient and convenient, and to some extent, they are: but for who, and how much, and at what cost?

At a dizzying pace the Metaverse is becoming more and more “real”, people are finding themselves chronically online (and leaving digital traces, whether intentionally or not), and to fuel our existences, what we call “natural resources” are continuously and increasingly mined: and soon, the race to mine the moon and the deep sea will begin too.

Technology is a force, a tool, embedded with self-reinforcing ideology: and within the current, dominant cultural paradigm it has opened up frontiers for exploration and exploitation, building a world ripe for the taking by an elite few, and depleted for the rest. Most of us feel as though our lives are somewhat better, but vaguely so, and there are feelings (underlying for some, distinctly felt for others) of drifting: disembodiment? Disconnection? Disillusionment?

To be clear, the standpoint from which we are speaking is not anti-technology, though it is certainly not particularly enthusiastic, nor optimistic: there is enough of both. What is more valuable and pertinent, and more difficult, is somewhere we can speak of as liminal, in-between.

The starting point for this is the term “cyborg”, and the term itself has notably interesting origins: first appearing in an article called “Cyborgs and Space” in 1960, proposed by Manfred Clynes and Nathan Kline, the term “cyborg” was less about “the interface between the organism and the technology”: “The cyborg was not less human, but more.”

As they wrote in 1960, “an organizational system in which such robot-like problems are taken care of automatically and unconsciously, leaving man free to explore, to create, to think, and to feel”. This way of thinking about technology, as enabling and liberating, is today problematic due to its usage by techno-optimists who have used this narrative to embed greater dependence on technology. So what Clynes and Kline originally intended is not the point: instead it is how it has been interpreted that is the starting point for discussion.

Specifically, we are not attempting to view technology and humans as separate entities, but rather we are interested in the “interface”. In the spirit of how it has been interpreted, we are asking: what happens when man and the machine meet? What happens before, and after they meet? What are the impulses that animate their meeting, and what are the effects produced? How are they felt?

We are interested in this: “The cyborg was not less human, but more.”#

What are the hard lines we have drawn, and how do we dissolve those boundaries to sit with the questions we asked about how our lives are better, whose we mean by “our”, and by how much, and at what cost. In asking all of these questions we are echoing, somewhat, Donna Haraway’s Cyborg Manifesto.

According to Haraway the cyborg myth “is about transgressed boundaries, potent fusions, and dangerous possibilities, which progressive people might explore as one part of needed political work.” In the same text she writes that the cyborg “is a kind of disassembled and reassembled, postmodern collective and personal self.” In this spirit we are inquiring into what makes up our selves, and how does technology, that is no longer a separate entity that we can cleanly divorce from, transgress the boundaries of our selves? How has technology become interwoven into and infused with our lives and experiences, for better and worse? What does it mean to become a cyborg?

As Sophie Strand says: “The truth is that we are [all] implicated. There’s no exclusion zone.” How can we better understand technology as the force that it is and that it has become, not by critiquing it from the outside, but by embracing how technology has threaded through us? This involves rejecting a purity politics, allowing ourselves to traverse both worlds, because they are not separate. Interdisciplinary designer Gizem Oktay writes about thinking through technology and liminality: “In mythology, the archetype of “trickster”… is a character who can travel between two realms”. Perhaps we should lean into a trickster politics instead.

An example would make this inquiry less abstract. Heather Davis, assistant professor of Culture and Media, is the author of Plastic Matter, in which she looks at plastic (which is itself a form of technology, or at the very least brought into the world through technology) in this spirit. In her book, she describes plastic as “something so present, so ubiquitous, that it risks becoming invisible.” She writes: “Plastic has radically reshaped the world and our relations to it, even as the question of how plastics may be modifying the world speaks to the aporia of inheritance: we cannot know because the questions we ask, and the environments we are in, are already determined by plastic’s presence.”

The same can be said about technology: of course there are more explicit and visible types of technology which consequently have more explicit and visible effects, but a vast number of technologies have—and broadly speaking, technology as a force has—seeped into our lives and changed the way we perceive, think and behave in the world. Davis thinks through the “intimacies of plastic” through inheritance as a framework: “For the philosopher Jacques Derrida, inheritance is always in the making as it works through us. … Plastic matter describes the intergenerational transfers of wealth, the differential accumulations of toxins, and the effects that these have on thinking about questions of power and privilege through the lenses of capitalism and settler colonialism.”

When we think of cyborgs and of how humans are intimately entangled with technology, we can access these questions too: questions about how we are wrapped up in the movement of technology through lands and hands—how are we, through technology, implicated in relations of liberation and empowerment, and oppression and exploitation? Implicated in processes and systems that simultaneously bring about conveniences and connections, and dependence and debt? How are we inheriting (continuous tense) these technologies? Or maybe the question is why?

If technology is a medium, what is it a medium for?#

What are the impulses that go into the creation and use of these technologies? David Abram proposes in his essay, “Magic and the Machine”, that the development of technologies “is tacitly driven by an impulse to recreate, somehow, the animistic experience common to virtually all of our indigenous ancestors—the experience of living in a fully sentient world, a reality filled with intelligence?”

Abram argues that technologies, “humanly-built artifacts”, are “all basically a big extension of the human nervous system.” He points to the example of the GPS, which he likens to (once-mastered) skill of inhabiting our places: “in the space of a little more than a decade, innumerable humans are forfeiting—are short-circuiting—the most ancient and visceral attunement between our animal body and the animate earth, which is our never-entirely-conscious ability to find our way within the local terrain. … now, using GPS, we’ve interrupted that old rapport between our bodies and the earthly sensuous.”

It’s paradoxical, he shares: “we remain transfixed by these tools, searching in and through our digital engagements for an encounter they seem to promise yet never really provide… the more we engage these remarkable tools, the less available we are for any actual contact outside the purely human estate.” Abram is right, but this is also one example of one way of thinking about ourselves as cyborgs, and a more critical one at that. But Abram’s perspective shows us that if we don’t allow our selves to have more permeable boundaries, then we won’t be able to see clearly how deeply we are interwoven into these technologies.

“We do not exist “in” our bodies anymore. We snapped a part of our brains and eyes and we implanted them on our mobile phones. A part of our brains is Google itself now, and we are not ashamed to use this extrapolated brain and its capabilities incessantly. As the mind-body duality dissolves itself into an entanglement of elongations of corporeality and consciousness, we are becoming liminality as we live entangled lives on both virtual and corporeal realms.”#

Gizem Oktay, “A Thinking Tool for COVID-19 and Beyond: Liminality”

While Haraway’s Cyborg Manifesto is often the first text to be quoted in the context of thinking through these questions, it’s worth pointing out that if we want to learn about the dissolution of boundaries between technology and humans, and about what the interconnectedness of the two realms mean, the lived experiences of disabled people provide much of the wisdom we are looking for. Jillian Weise, poet, performance artist and disability rights activist, has criticised Haraway before, rightfully cautioning against the claim that “We are all cyborgs”, pointing out that for disabled people, the cyborg body is not a metaphor, and technology is not an accessory. Disabled people have been living in the interstitial space, they have been troubling categorisation, and they are the first cyborgs.

CYBORGS ARE NOT A TECHNOCRATIC, TRANSHUMANIST FANTASY. CYBORGS ARE DISABLED PEOPLE AND WE ALREADY EXIST.#

I DIE WITHOUT BATTERIES. IM A CIRCUITED, NETWORKED CHRONICALLY ILL HUMAN WITH A ROBOT ORGAN. WHERE DO YOU PLACE ME IN YOUR CYBORG IMAGINARY?#

DONNA HARAWAY WROTE US OUT OF THE THEORY. BUT WE WERE THE EXPERIMENTS. WE ARE THE FIRST CYBORGS#

We return again to Sophie Strand’s essay, “We Must Risk New Shapes”, where she writes: “Those with long term illness and with a legacy of trauma understand that hybridity is not something you order off the menu. It arrives and makes a home in your body. Suddenly you are more than you ever thought you could be, in ways both terrifying and curious.” Instead of a blanket criticism of technology as “bad” or an unquestioning acceptance of technology as “good”: we are invited here by Strand to think through how we are “body plus”. Through technology, how are we body plus technology? It is, as she puts it, “not something you order off the menu”.

We cannot go back in time and reverse how deeply interconnected we are, but we can seek to clarify in what ways, to what ends, and at what costs. And only when we clarify these then can we try to bring about just, more human, technological futures.