The world began with Chaos, Eros, and Gaia... — Advaya

“[At] this conjecture, […] [we have] an opportunity to end entirely the harmful repression of chaos, which may be crucial for our understanding of, and harmonious coexistence with, nature and the development of a peaceful global society.” - Chaos Gaia Eros, Ralph Abraham 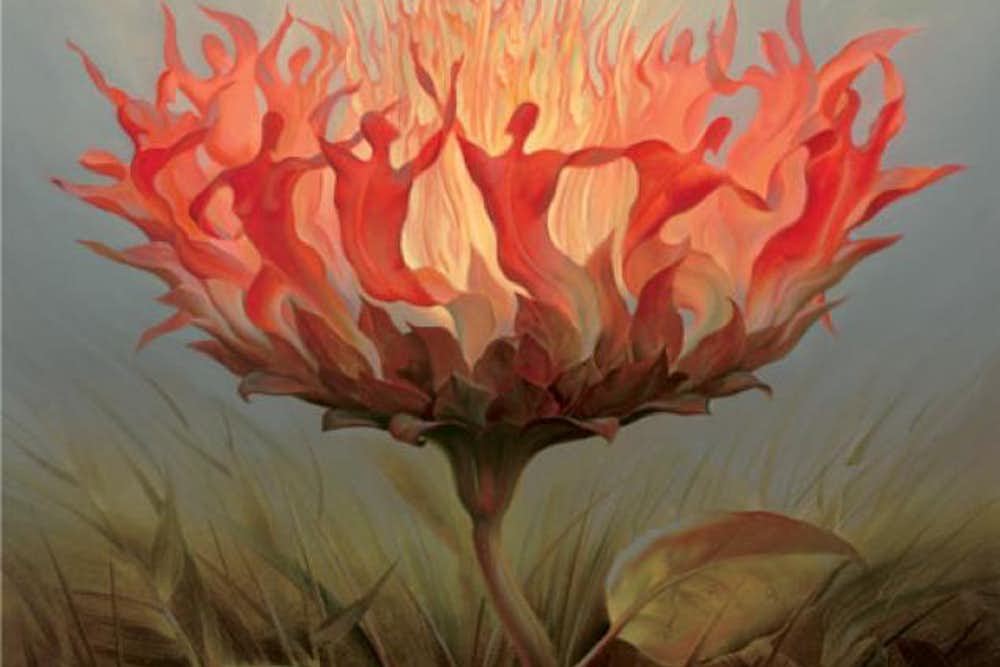 “Cosmos means order, or arrangement, and a cosmogony is a theory of the origin of the universe. […] Our own cosmogony may be understood as an outgrowth of that of the ancient Babylonians, in whose early myths we find chaos playing a special role. Chaos now means disorder, but in ancient myths there are important variant meanings, to which we now turn.”#

If you’ve chanced upon Greek mythology, it’s likely you’ve heard stories from Homer. But a lesser-known ancient Greek poet, who wrote around the same time as Homer, is behind the stories that are the subject of our interest today. Hesiod’s Theogony, composed around 700 BCE, is the standard creation myth of Greek mythology - it tells the story of how all the Greek gods came to be. In Theogony Hesiod tells the tale of the first primordial deities. Though there were four, three of them are considered the primordial triad: Chaos, Gaia, and Eros.

From them came the existence of all divine entities: but how? In this story, Eros, the creative impulse later known as the god of carnal love, was the procreative, generative force, the active energy through which divinity is generated from its parents. Gaia, who came to be seen as the ancestral mother, the personification of Earth, is for Hesiod the substantial foundation of all things, the created universe. And what about Chaos? Here the word ‘chaos’ does not mean disorder. Instead, it is an abstract cosmic principle referring to the source of all creation.

John Bussanich notes in “A theoretical interpretation of Hesiod’s Chaos”, that Chaos “is a much more elusive figure. It is not readily apparent why Chaos is necessary for cosmogony.” What can Chaos be? What place does Chaos have at the centre of a creation myth?

Bussanich explains: “Chaos represents the dimensionless expanses of cosmic depth in which cosmic manifestation begins. Thus it possesses a principial function: it is necessary for generation of the cosmos and gods.” Principial here means initial, primary. Chaos’ function is tied to the beginning of everything, but Chaos is not generative, “nor does it hold the seeds of potentialities of all things within itself.” It must be understood in relation to its counterparts Gaia and Eros, in the triad.

Bussanich ventures: “While Eros signifies the mechanism, Gaia can be seen as an attempt to symbolize the matrix of creation. She concentrates these functions in herself: mother of the gods, the seat or abode of all things, and a figurative expression of cosmic substance. As the necessary counterpart to the insubstantiality of Chaos, she makes concrete the notion of a “place for things” which is incompletely suggested by the yawning space of Chaos. We should probably imagine that Gaia comes-to-be in Chaos, but not as an empirical object appears in space; rather, as principial space, Chaos defines the totality of reality at the point Gaia appears. She can only exist within Chaos, simply because nothing else exists.”

For Hesiod, Chaos is essential to creation. Chaos is the only medium through which the substantive reality that is Gaia can come to be. Perhaps we can think of it this way: the expansive material reality, the flourishing abundance of our earth, is only as full as the space that Chaos allows to exist. The fullness of place that is the planet in which we dwell is enabled by (the nothingness that is) Chaos.

This is recognised in creation myths across cultures, from the goddess worship of Ishtar by the Semitic people of Mesopotamia in 5000 B.C.E. or the Enuma Elish, the Epic of Creation in the Babylonian seaside town of Eridu, through to the Hebrew cosmogony of Genesis 1.

In Mespotamia, in the rendering of the Merlin Stone, we have the following: Queen of Heaven, Goddess of the Universe, / the One who walked in terrible chaos / and brought life by the law of love / and out of chaos brought us harmony / and from chaos She has led us by the hand.”

In Babylonia: “The appearance of the gods of light and order was followed by the revolt of Tiamat. Then the forces of darkness and chaos were overthrown by Marduk […] who split Tiamat in half like the shell of an oyster, making the sky and the sea. Next came the regulation of the solar system and calendar, the creation of plants and animals, and the making of humanity.”

These mythical creation stories can also be paired with mythical histories. In Hindu doctrine, for example, there are cycles divided into different ages or yugas. Here, “A creation occurs after each catastrophic annihilation, or end of the cycle, and each age represents a decline in virtue.”

In contrast, Ralph H. Abraham suggests that in our current paradigm “the creation of the universe […] means the subjugation of chaos by cosmos. Ours is a universe of law and order. […] The conquest of chaos by the forces of law and order is a basic feature of the dominator society. […] In our current paradigm, order is to chaos as good is to evil.”#

He seems to be suggesting that these creation myths show how our societies of law and order have misunderstood chaos as merely disorder, as evil, rather than the interpretation of chaos as necessary nothingness that begets abundance, and through that have resulted domination paradigms, with warped senses and conceptualisations of power.#

However, Abraham notes that now, with the aid of chaos theory, “science has discovered the order within chaos. And as chaos becomes acceptable to science, […] We are learning that chaos is essential to the survival of life.” The point is, as is the case with all these creation myths that we’ve redefined to fit our dominant linear paradigm, chaos is not merely bad. Perhaps it includes disorder, perhaps it is just nothingness—whatever the case is, chaos is not the evil counterpart of order (Abraham adds that revolutionaries of chaos like Heraclitus (500 B.C.), Jesus (30 A.D.), and Hypatia (350 A.D.) are the “best-known chaos revolutionaries of ancient times” who have suffered persecution for their chaos): chaos is the counterpart of creation.

Rather, perhaps it can be empowering to think of rising from the ashes, from the nothingness of the ruins of a capitalistic world; that as much as the disasters and destructive systems have caused so much damage, we can create, in equal parts and more, better.

Or perhaps—another way of thinking about it would be this: the world of dominator systems, the ravages of imperialism and colonialism, the destruction of nature, the oppression of people, is one cycle of chaos. These systems have reinterpreted creation myths to be binary. Within this paradigm, chaos is bad and must be conquered. But the master’s tools will never dismantle the master’s house: perhaps we have to reclaim the creation myths and bring our own Chaos, birthing our just, equitable, truly shared Gaia, through the generative force of Eros.

Join us at Medicine Festival 2022. You are invited to join us as one small yet vital part of an emerging global community of transformation; reconnecting with and remembering both our ancestral wisdom and that of planetary consciousness. Just as the lotus flower blossoms from muddy waters, we too, are metamorphosing from our collective cocoons into a new state of being. Now is the time to discover our wisdom and strength, to live in loving and joyful participation with our home and each other, creating within our hearts a Heaven on Earth.

At Medicine this year there will be ceremonies and rituals hosted by indigenous leaders Peu Nawa and Towahu of the Yawanawa tribe in the Brazilian Amazon, as well other indigenous elders from the British Isles and different global traditions. There will be music, talks and discussions, and a curated Wellbeing Programme and Healing Village, alongside nourishing food at in-house cafes.

All profits from the event are going to preserve indigenous communities and to regenerate the Earth. The festival for people & planet awaits: join us from 18-21st August. Get tickets here and take 10% off with ADVAYA10.

Advaya is programming the Talks area at Medicine Festival. We have an amazing line up confirmed. The three days of programming are taking the Chaos, Gaia and Eros trinity as our lead.

We begin on Friday with CHAOS. We explore the world we find ourselves in, and the exciting solutions, visions and possibilities within our reach. We explore Psychedelic Medicalisation and how psychedelics could change the world. We look at the flows of power, and how we can reimagine the rules of business, money, technology and society. We look at our food systems, Web3, blockchain, and the Radical Imagination. On Saturday we continue with GAIA. We explore death through different lenses, nature connection, altered states and transformation, how we can relearn the language of a lost world, how to decolonise indigenous narratives, Herbalism and radical healing, as well as the power of ritual and ceremony. On Sunday we complete our trilogy with EROS. We explore relationships and interrelationships as creative principals looking at war and peace, the true meaning of community, the collective imagination, conspirituality and the dangers of mythical thinking, kinship in the age of cyborgs, as well as how we can achieve full embodied health for physical, mental and social wellbeing.