Bonnie and the Acorn — Advaya

Bonnie and the Acorn

Article with Augusta Bruce on Friday 18th May 2018

Augusta Bruce tells the story of an old and lonely woman, whose smothering of her acorn leads to dire and comic consequences. 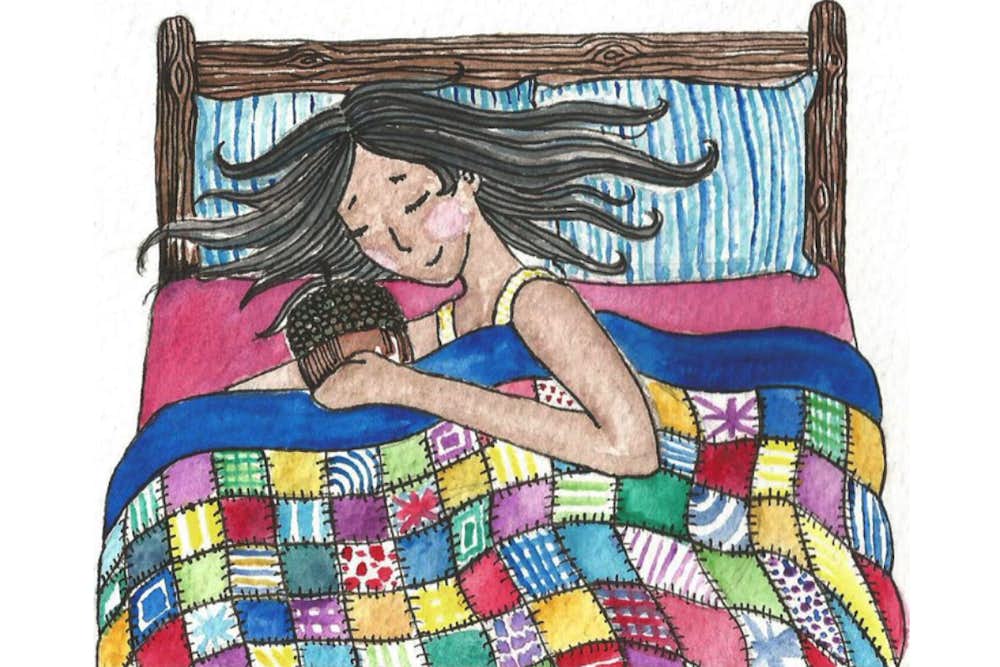 Once upon a time there lived a kind old woman called Bonnie, who was never able to have any children.

One day she was tending to her garden when something caught her eye. It was an acorn, the most beautiful acorn she’d ever seen, lying quietly under an old oak tree. The acorn was special: it had a warm, golden glow about it, and when Bonnie held it to her ear it made a soft rattling sound. Bonnie named the acorn Anna, and from that moment on she loved the acorn and kept it by her side everywhere she went, all day every day, even when she slept. But Bonnie was so terrified of losing Anna, and would clutch her so tightly she couldn’t breathe or receive any light.

Anna quickly became frustrated. First she tried shouting, but her mother was unable to hear. So then she sulked and stewed in silence, as her mother’s palm gripped her, fleshy and tight, like a monstrous placenta. The longer Anna sulked, the crosser she became. And the crosser she became, the more chlorophyll pumped round her body, until she was boiling with rage.

‘My my,’ her mother thought, ‘How warm Anna is today,’ and she gripped her more tightly. This made Anna crosser still, until all her rage and suffocation coalesced to a point where she couldn’t contain herself any longer – she snapped. She blew her top. And her mother felt like a lightning bolt had shot through her hand, hot and sharp.

‘Ow!’ Bonnie yelped, casting her daughter to the ground. On her palm there was an ugly red mark from where her daughter had burned her. ‘Oh, Anna!’ she wailed. ‘Look what you’ve done!’

The acorn didn’t respond, so Bonnie left the room to search for some balm for her burn. When she came back, hand bandaged up, spirits renewed, she was ready to forgive her daughter, but Anna had other plans. When Bonnie tried to lift her, she found that she couldn’t even get close – Anna was still seething.

‘Strange,’ her mother thought, putting on her flowery oven gloves and gently placing Anna on the counter. ‘What’s got into you?’

The next morning Anna was still in a stew. And the morning after that.

‘So moody,’ her mother tutted. Putting the oven gloves back on, she tried running her daughter under cold water, but this caused Anna to blow out hot jets of sulphurous steam.

‘Stop it! Stop it!’ Bonnie cried, flailing for the tap.Anna continued to sizzle and spit, so Bonnie tried putting her into the freezer. But the following morning Anna was just the same, if not worse, and her skin was now red and hewn and blotchy. Bonnie tugged at her hair and wrung her hands when she saw her: ‘What can I do!’ she cried, over and over.

Suddenly she remembered her friend Jonas, an affable seed doctor who worked in Kew Gardens. She quickly scooped Anna up with her oven gloves, and made for the door.

Jonas was in the Temperate House when Bonnie found him.

‘Merlin’s beard!’ he cried. ‘A crosser acorn I never saw!’

‘I’ve tried everything!’ Bonnie wailed, tearing at her hair. ‘Put her in the freezer. Ran her under cold water. Tried reasoning with her. There’s nothing to be done. I’m at my wit’s end!’

Standing there, with her flowery oven gloves and frazzled expression, Jonas almost believed her.

‘Come now, Bonnie my dear. Let’s not resort to hyperbole. I know what this youngling needs, and so do you.’

There was a pause.

‘Absolutely nothing. The reason she’s so cross is because you do too much.’

‘Nonsense! I take good care of her!’

‘Precisely,’ Jonas said, placing a kind hand on Bonnie’s shoulder. ‘You look after her too much. She’s unable to breathe.’

Bonnie shrank back in horror.

‘You’ll see,’ Jonas said, reassuring her. ‘Leave her in peace and she’ll be as good as new. Now, if you don’t mind, I have some suicidal azaleas that require my attention.’

Anna was too hot and bothered to hear her.

Bonnie buried her daughter that night, under the old oak tree.

‘Sleep well,’ she sang, as she covered Anna up with dirt.

The years slipped by. Bonnie moved on with her life, and sometimes forgot that Anna had existed, except when she saw the scar on her hand, but even that was beginning to fade.

One day she noticed that the scar had gone, so she rushed to the garden. Her neighbours watched as she began digging like a maniac, crying: ‘She’s gone, she’s gone!’

She was so distressed that she failed to see the little green shoot that was caught up amongst the wreckage.